Nuclear Fusion Power on the Horizon 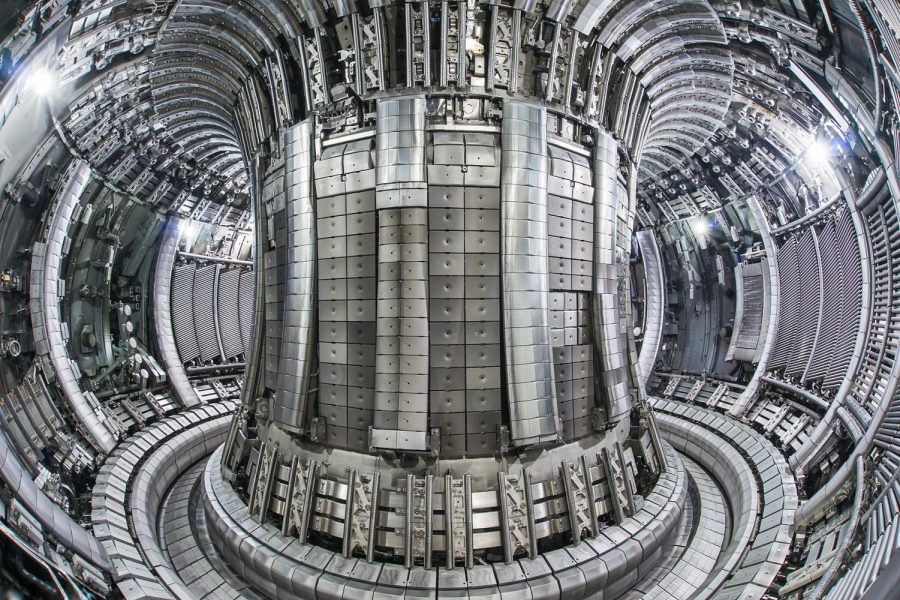 A look inside the JET fusion reactor based in Oxfordshire, UK

This insanely high temperature is a key part of nuclear fusion, a very efficient form of energy. To explain it simply, under extreme pressure and heat, isotopes of hydrogen atoms collide to form helium and an extra neutron, which splits off to heat a tank of water. The Sun utilizes nuclear fusion for its energy, but due to its naturally high pressure, the temperature doesn’t need to exceed 10 million degrees Celsius. Earth, on the other hand, does not have that high, naturally occurring pressure, so it must compensate by raising the temperature tenfold to 100 million degrees Celsius. Nuclear fusion, the merging of smaller atoms, is the direct opposite of nuclear fission, the splitting of larger atoms. Unlike nuclear fission and fossil fuels, fusion produces no long-term radioactive products and no greenhouse gases. The efficiency of fusion is also very impressive with one kilogram of fusion fuel having the same energy output as ten million kilograms of fossil fuels.

In the JET laboratory, scientists broke the previous record of most energy produced by a fusion reactor. They ran the reactor for a total of 5 seconds and produced 11 megawatts of power. Although the reactor took more energy to run in that test than it made, on longer tests in larger reactors it would break even and eventually produce more energy than it consumed. Larger reactors such as the ITER facility in southern France can achieve this energy-producing state while the JET lab only exists to prototype possible designs. Once the ITER facility starts operation sometime in the next ten years or so, energy production will be revolutionized.